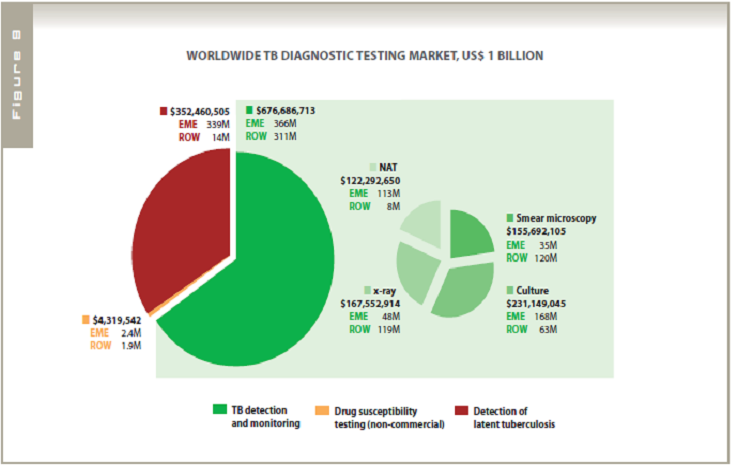 The TB diagnostic market has several traditional segments, and the molecular diagnostic methods, that became available recently. Manual sputum smear microscopy is the most widely used screening method for TB screening of suspected patients, as it is the most affordable and often the only accessible method in low resource environments, resulting in over 87 Mi determinations in 2008, with WHO estimations of 200m necessary determinations to be reached by 2020.

Widespread use of the “culture method”, the diagnostic process, considered as the gold standard due to its higher sensitivity, is limited by its high instrument costs, laboratory infrastructure need and a long time-to-result (several weeks).

The traditional X-Ray method is also instrument intensive, hence costly and of limited specificity, while the skin probe method is mainly used for screening latent TB as it is of limted sensitivity.

Serology based rapid tests have been recently banned by WHO, in a „first ever” negative policiy statement issued in 2011.

The widespread use at lower levels of the healthcare diagnostic pyramid of the most sensitive and specific molecular diagnostic method is constrained by its considerable price per diagnosis, high level of complexity, a resulting biohazard environment, as well as the requirement of highly trained personnel. Consequently, this method is rolled out for complex, HIV infected, drug resistant determinations, normally subsequent to traditional pre-screening examinations (such as smear microscopy).